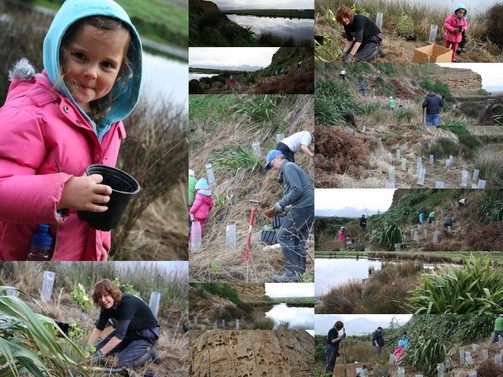 The Lagoon is adjacent to the Lake Ferry settlement, Lake Onoke, Ocean Beach and Onoke Spit and is part of the Wairarapa Moana wetland complex. These places are valued for recreation, with many local and outside people visiting. This renders the Lagoon as an ideal site to promote the biodiversity values of coastal lagoons and wetlands. It is envisaged that this would be achieved by enhancing and protecting the existing biodiversity and promoting key biodiversity values to the public. We are partnering with Greater Wellington Regional Council in this project.

Vision: The Onoke/Okorewa Lagoon is a healthy coastal lagoon within the Wairarapa Moana Complex supporting indigenous flora and fauna, for the education and enjoyment of the NZ public

Jane Lenting
SWBG  Committee Member
After 25 years as an oil and gas engineer and refinery planner, Jane retrained in viticulture and winemaking at Lincoln University.  An
interest in growing native plants from seed and a  plant physiology paper taken quite by chance while at Lincoln helped steer her in the
direction of wetlands restoration, and in particular the South Wairarapa Biodiversity Group.
Jane's day job is Cellar Sales Manager at Palliser Estate Wines in Martinborough. 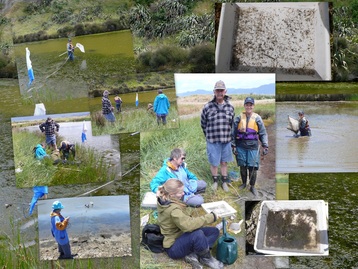 On  22 December, five of us did a monitoring day at Onoke/Okorewa Lagoon, to record the “baseline” lagoon water quality.  A commonly accepted measure of wetlands health is the quantity, diversity and species of “macro invertebrates”.  These are animals like crustaceans, snails and worms which live in the water.  The “macro” bit just means that if you use a 0.5mm mesh on a net, you’ll catch them.  Vertebrates such as fish can also be caught in the same type of net.  Five points in the lagoon were swept with the net and there was a surprising amount of life in the net when I pulled it up each time, given how dead the lagoon looks.  We don’t yet have a full interpretation of the data, but Ella Buckley (ecology graduate) came along and was able to give advice on sampling and then do a first pass at identification.  Water samples were also taken at 3 locations.

The lagoon was truly mucky and had a nasty smell, especially down the eastern end.  It was unclear where the bottom was, it was so soft.  In places it was too sticky underfoot to walk and I had to float and swim even though the water was shallow.  My gear ended up taking on board some of the muckiness and it took 4 lots of soaking, then washing then drying my wetsuit before it was in a state where I was happy to use it again!

It was great to have the support of SWBG committee members Perry (safety officer) and Diane (sampling assistant) as well as my husband Victor (scribe and photographer) and Ella.